2020 alumni updates from The Blazer: a longtime favourite 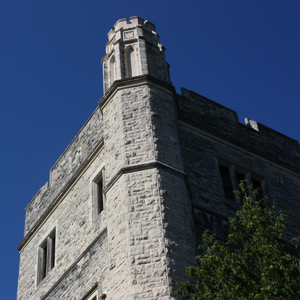 Readers of CMU's The Blazer magazine often say they flip right to the Alumni News section before reading anything else. Unfortunately, the past two issues of The Blazer were not able to include alumni news, as the arrival of COVID-19 resulted in shorter issues and different content.

But we want to keep the tradition alive! Below is a compilation of news from a few of our alumni (including the most adorable baby photos).

Bob Bartel (CMBC '65), Saskatoon, SK, wrote a children's book, Nutaui's Cap, which he launched in February 2020. It tells the true story of Nanass, a young girl whose life is changed when the low-level flying of NATO supersonic jets endangers the life of her community, the Sheshatshiu Innu First Nation, and her father is arrested in the protests. In 1986-89, Bob and his wife lived in Happy Valley-Goose Bay, Labrador, where they were program directors for Mennonite Central Committee, supporting the Innu in their struggle for sovereignty over their homeland. The book is co-published with Mamu Tshishkutamashutau Innu Education, the Innu school board of Labrador, and is written in English and two dialects of the Innu language. All royalties from the book go to the Mamu Tshishkutamashutau Innu Education scholarship fund. [ photo ]

Bill Janzen (CMBC 1966-67), Ottawa, ON, is the writer of a new book, Advocating for Peace: Stories from the Ottawa Office of Mennonite Central Committee, 1975–2008, published by Pandora Press in February 2020. He served as the director of MCC's Ottawa Office, which monitors governmental policy and does advocacy work, from its inception in 1975 until 2008. Bill has published numerous other books. In February 2019, he was honoured in the Senate of Canada for his role in crafting the first Master Agreement for the Private Sponsorship of Refugees in 1979, shaping Canada into the welcoming country it has become. [ photo 1, Photo 2 ]

Mark Bartel (MBBC 1990), Calgary, AB, recently joined the faculty at Ambrose University in Calgary as Associate Professor of Music. From 2005–19 he taught at Friends University in Wichita, Kansas, where he was also conductor of the Wichita Chamber Chorale and the Wichita Community Children's choir and served as president of the Kansas Choral Directors Association. He holds Master of Music and Master of Sacred Music degrees from Southern Methodist University and a Doctor of Musical Arts degree from the Eastman School of Music. [ photo ]

Kyle Penner (CMU '05), Steinbach, MB, wrote his first book, Who Goes Canoeing with their Mother-in-Law? The Misguided Tales of an Avid Paddler, published in December 2019. It is a compilation of 17 stories from his many canoeing adventures, illustrated by his mother-in-law, Patti Enns, with whom he indeed went canoeing. Kyle is also associate pastor at Grace Mennonite Church in Steinbach. [ photo ]

Justin Fuhr (CMU '09), Winnipeg, MB, graduated with his master's degree in Library and Information Studies from the University of Alberta in 2019. He now works as a librarian at the University of Manitoba's Sciences and Technology Library. His research interests include reskilling librarians to provide modern academic library services and adding alternative skill sets, such as programming languages and audiovisual production. [ photo ]

Andrea Dick (CMU '10), Sioux Lookout, ON, is in her third year of work as a pediatric occupational therapist. Since graduating from the University of Manitoba with a Master in Occupational Therapy, she has been working with children and their families in and around Sioux Lookout as well as fly-in northern communities in Northwestern Ontario. [ photo ]

Michael Harms (CMU '11), Winnipeg, MB, is one of the owners of Hildegard's Bakery, a Winnipeg bakery selling speciality bread, pizza, and other treats hand-made with local ingredients. They have implemented a pay-it-forward program to make their food accessible to customers who couldn't otherwise afford it. Customers can either buy a button to put in a jar or take a button from the jar to redeem for a coffee or a muffin from the bakery. Located in a gentrifying neighbourhood, the bakery staff want to ensure they're serving all members of their community.

Brad Leitch (CMU '13), Vancouver, BC, is an award-winning filmmaker and the founder and executive producer of Rebel Sky Media, a documentary and video production company. He recently directed a new film, Treaty Walk: A Journey for Common Ground, which was released to the public in May 2020 and won an award at the Impact Docs Awards. It documents a group of people who embarked on a 14-day walk through Alberta last June to learn and raise awareness about what it means to be treaty people. Brad also directed the documentaries Reserve 107 and This Fight Continues: 262 & the Declaration, among others. [ photo ]

Danielle Bailey (CMU '14), Winnipeg, MB, graduated in June 2019 with a Master of Arts in Leadership Studies from Royal Roads University in Colwood, BC. Her master's thesis was titled, "Designing CMU's Social Innovation Lab," and explored engaging stakeholders in the Centre for Resilience at CMU in a collaborative curriculum design process to inform recommendations for community engagement strategies and curriculum design relative to social innovation.

Rachel Sawatzky (OT '12, CMU '16), Winnipeg, MB, graduated in November 2019 with a Master of Occupational Therapy from the University of Manitoba. A few months earlier, in September, she began working as an occupational therapist for the Red River Valley School Division in Morris, MB.

Desiree Penner (CMU '16), Elm Creek, MB, spent the month of March as an artist-in-residence at The Ou Gallery in Duncan, BC on Vancouver Island. After graduating with a Bachelor of Social Work from the University of Manitoba in 2018, she was a social worker for Southern Health for the following year. Desiree began painting with watercolours after finishing her courses and has since shown her artwork in regional and provincial juried art shows and galleries. Her solo exhibition showed this summer at the Golden Prairie Arts Council in Carman, MB and she is working on writing and illustrating a children's book. [ photo ]

Jacqueline Giesbrecht (OT '12, CMU '18), Kingston, ON, graduated in 2020 with a Master of Arts in Religious Studies from Queen's University in Kingston. She wrote her master's research essay on sacredness, disability and accessibility in Judeo-Christian faith communities in North America. She recently began pursuing her PhD in Cultural Studies at Queen's University, where she will continue this research. She is also a host of Nearly Numinous, a podcast that seeks to blend the academic study of religion with real world lived experience. [ photo ]

Please model your information after the current listings above, beginning with name, graduation year, city, and province or state.