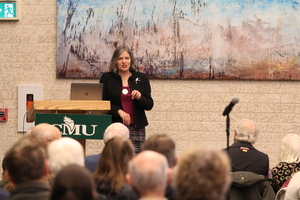 Dr. Deborah Haarsma is President of BioLogos. She is a frequent speaker on modern science and Christian faith at research universities, churches, and public venues like the National Press Club. Her work appears in several recent books, including Four Views on Creation, Evolution, and Design and Christ and the Created Order. She wrote the book Origins with her husband and fellow physicist, Loren Haarsma, presenting the agreements and disagreements among Christians regarding the history of life and the universe. She edited the anthology Delight in Creation: Scientists Share Their Work with the Church with Rev. Scott Hoezee. Previously, Haarsma served as professor and chair of the Department of Physics and Astronomy at Calvin College. She is an experienced research scientist, with several publications in the Astrophysical Journal and the Astronomical Journal on extragalactic astronomy and cosmology. She has studied large galaxies, galaxy clusters, the curvature of space, and the expansion of the universe using telescopes around the world and in orbit. Haarsma completed her doctoral work in astrophysics at the Massachusetts Institute of Technology and her undergraduate work in physics and music at Bethel University. She and Loren enjoy science fiction and classical music, and live in Grand Rapids, Michigan.

"The Universe Declares the Glory of God"

Dr. Haarsma shares her scientific and spiritual journey. When viewed through the lens of biblical faith, the universe reveals God's beauty, faithfulness, and creativity.

"What Would Life Beyond Earth Mean for Christians?"

Astronomers have now discovered thousands of planets in orbit around other stars. We may soon be able to detect whether those planets contain living things. But will that life be intelligent? Will we be able to communicate with it? What would such discoveries mean for Christian theology?

"God and the Multiverse"

The last century has transformed our understanding of the cosmos. We now know that the universe began 13.8 billion years ago in a Big Bang and that it continues to expand at an ever-increasing rate. We marvel at the evidence of physical laws fine-tuned for life. New research hints that our universe may be part of a much bigger multiverse of imagination-staggering immensity. Dr. Haarsma will lead a fascinating tour of the cosmos and discuss the implications of recent discoveries for our understanding of scripture, of God, and of ourselves.