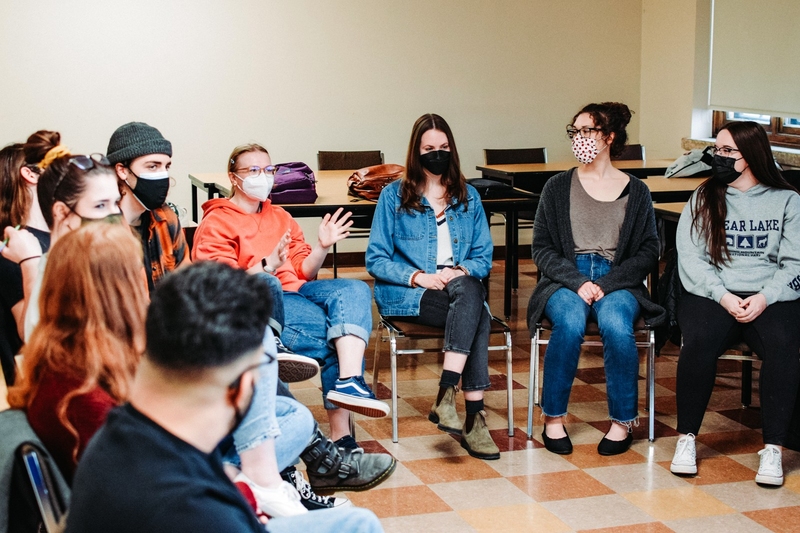 Throughout the semester, students considered how to engage the TRC's 94 calls to action; they practiced writing letters to stakeholders in higher music education within CMU; they created resource binders on decolonizing and indigenizing their practices, which they and their peers will be able to use in their future classrooms.

Studying music education means learning scales and chord progressions, practicing how to move your hands while conducting, and planning out class schedules. But sometimes it also involves examining and re-evaluating the entire education system at its core.

This is what a group of CMU students did every week last semester, when they gathered for one of CMU's newest courses: Decolonizing Music Education, guided by Associate Professor of Music Janet Brenneman. Through listening, reading, discussing, and creating, students learned about the history and current forms of colonialism present in Canadian music education classrooms, and explored how to put the concepts of decolonization and indigenization into action.

The new course is the product of a faculty-alumni collaboration. Madeleine Friesen (CMU '20, Bachelor of Music) is currently working on her Master of Arts in Music Education with Collaborative Studies in Sexual Diversity at the University of Toronto.

The idea to write a syllabus came from one of her courses, Music Education and the Truth and Reconciliation Commission (TRC) of Canada, in which students had to create a final project that they could use in their own professions.

Aware that Brenneman was teaching the upcoming course but had not yet drafted a syllabus, Friesen partnered with their former professor to develop the course and later facilitate it together.

As two white settler people, Brenneman and Friesen recognized the challenges they faced as co-facilitators of the course. They approached the class with openness about their limitations and kept in mind a quote by Margaret Kovach, an Indigenous professor and author of Nêhiyaw and Saulteaux ancestry: "We know what we know from where we stand. We need to be honest about that."

Their other approach was engaging mainly with Indigenous-created resources. They studied research by a Stó:lo scholar, met with a guest speaker of the Cayuga Nation, watched a musical written by a Métis poet, listened to Inuit musicians, and read articles about current Indigenous news.

Brenneman and Friesen were careful to clarify that they were facilitating, not teaching, the course. "I'm learning just as much, if not more, alongside the students," Brenneman said. "We are not experts in that area. We are humbled by what we ourselves continue to learn and it's really with that openness that we come to these discussions with the students."

Friesen added that "part of it is resisting colonial approaches to knowledge. Especially in the university, you sit in lecture classes and the professor gives you the knowledge, the student who knows nothing... it's reconfiguring and rethinking the idea of who gets to speak in the classroom, who has the knowledge, and what kind of knowledges are valued and assessed."

The small class sat in a circle every week, reading and discussing altogether and in small groups. The students were animated and eager to share, building on each other's comments. Indigenous and non-Indigenous students in the class brought a diversity of perspectives, and challenged Brenneman and Friesen to shape the course for a variety of experiences.

Throughout the semester, students considered how to engage the TRC's 94 calls to action; they practiced writing letters to stakeholders in higher music education within CMU; they created resource binders on decolonizing and indigenizing their practices, which they and their peers will be able to use in their future classrooms.

The course confronted and broadened Georg Neuhofer's worldview immensely. Neuhofer is a third-year music education student from Inglis, Manitoba. He was immediately intrigued by the course title and how it fit in with his degree, but had never taken any classes in Indigenous studies before.

"It's definitely made me think critically about everything I'm doing in my life, especially the music I'm making and what kind of composers I'm playing music of," he said. "It's uncomfortable sometimes too, which is something we've stressed throughout the class is good."

Brenneman encouraged the students to dream big, asking during one class what they would change in the music program if they could change anything. The students suggested incorporating non-western genres and forms of music making; they proposed mandatory Indigenous courses and more varied ways of assessing knowledge; they questioned whether traditional auditions or performances should even be required; they highlighted the need to center Indigenous voices and perspectives.

And these practices shouldn't be limited to music. "We have this decolonizing education [course], what about decolonizing any other field?" Neuhofer asked. "It's easy to talk and talk, but I hope CMU in the future does way more. Because we can do way more and we should do way more."