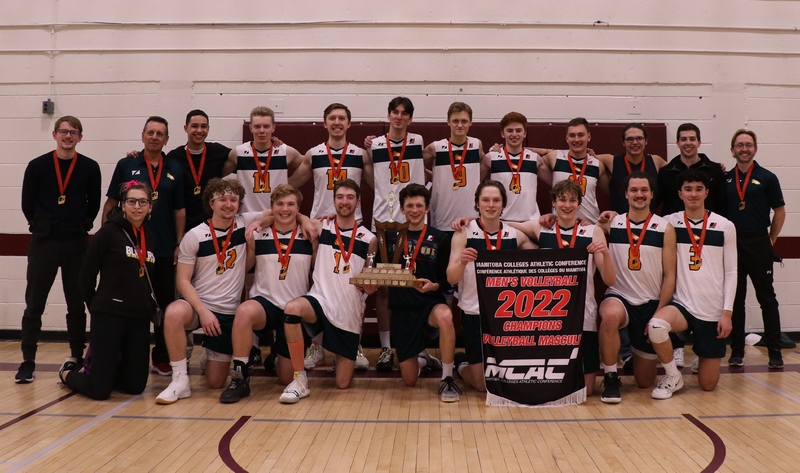 Ranked 11th nationally, the CMU Blazers men's volleyball team has its sights set on the nationals after claiming the 2022 MCAC championship

Protracted titles aside, the Blazers are headed to nationals for the first time in CMU history.

It all started at the MCAC Championships, hosted at Assiniboia Community College in Brandon. As one of the top-seeded teams in the MCAC, the Blazers were favoured to go the distance and reach the finals. After a commanding win in the semi-finals, the Blazers set their sights on gold—the only hurdle standing in their way were season rivals Providence University College Pilots.

The two equally matched teams took turns oscillating sets as the hard-fought battle raged. "In the final few sets we really put it together," says Tim Juvonen, second-year setter who was named championship MVP. "We refocused ourselves on what we needed to do."

The scrappy finals led to what can be described as a euphoric moment as the Blazers were crowned victorious and awarded the league's trophy.

Being the first year MCAC has been recognized by the larger CCAA, the Blazers will be the first team in the conference and attend nationals.

Head coach Don Dulder says nationals has been the team's goal since the beginning of the season. "We all wanted it badly, and it was a definite motivating factor. The guys worked extremely hard all season, and I cannot put into words how proud I am of them. They battled through adversity, COVID-19, injuries, but the one thing that has always stood out with this special group of guys is that there is no I in team," says Dulder.

Dulder has now led the men's volleyball team to four MCAC titles but remains grateful and says a trip to nationals was always a personal goal in his coaching career. "It was emotional right after the victory," says a reverent Dulder. "Nothing is better than seeing my guys jumping for joy right after the game-winning point," says the coach.

The win comes at the hands of a generally young roster. Comprised of mostly first- and second-year students, the team used its youth to its advantage.

Eldest team member Matthew Page says working with the malleable rookie players has been mutually beneficial. Not only are the greenhorns able to develop their skills with the guidance of the veteran players, but those older team members became reinvigorated by the vitality of the youth.

"It's a good combination," says the right side hitter. "It makes for a lot of exciting opportunities, especially for the young guys; they are going to do great in the future."

As the team's veteran player, Matthew Page has played a mentorship role to the young Blazers roster

The Blazers will head to Quebec City to attend nationals for the first time in MCAC history at the end of March. Page says this is a historic step for CMU and provincial athletics. "To be able to take the first crack at nationals for all the teams [apart of the MCAC], is very exciting," says Page.

Landing 11th on the CCAA men's volleyball national ranking means the Blazers are in a secure spot heading into the championship tournament, but their work will be cut out for them. "No doubt it's going to be tough at nationals," says coach Dulder. "We are playing against much larger colleges with larger populations to draw from, but my guys have played a lot of club ball and have a good fundamental foundation."

"I think it's going to be an interesting trip for us," says Juvonen. He says COVID-19 has been a thorn in the side of their team, and due to health and safety measures, they haven't been able to play teams from outside their conference in quite some time.

On the other hand, Juvonen says, "It also might be okay because other teams are also coming in blind. They haven't played us before going to nationals either."

In preparation for nationals, Dulder says the team will continue with their regular schedule of practices, play a few exhibition games, and watch video footage of rival teams who will also be attending the tournament. "It's been a long season, so we also are tapering a bit to prevent overuse injuries and keep the guys as fresh as possible," says Dulder.

"I think mentally [the Blazers] are tough and ready to play well," says Dulder.

Cara Isaak, director of athletics at CMU, says the Blazers are ready for the new challenge.

"These men have set high standards for themselves and are all very committed to the team's goals. The CMU communities are behind them, and we've heard from so many faculty, staff, alumni, sponsors, and students who will be cheering them on," says Isaak.