Creation care as career: spotlight on alumni farmers (part 4 of 4) 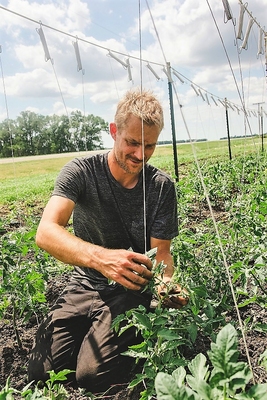 Nicholas Rempel at work on the farm

"This is my evangelical plea to any 20-something malcontents among you: stop wasting anger on The Corporation and The Conservatives and get some chickens instead." – Nicholas Rempel

Nicholas Rempel has been working on chemical-free farms in Manitoba for seven growing seasons. Along with Arianna Hildebrand of this series' last feature, and James Magnus-Johnson, founder of the CMU Centre for Resilience, Rempel is a former board member of Fireweed Food Co-op. Through 2014 and 2015 he studied International Development Studies (IDS) at CMU, and in 2016 he became a founding member of Natural Collective, a small farm and CSA located just outside Niverville MB. He is also a wry-humoured rogue.

Asked what prompted him to take up farming, Rempel chalks it up to "a desire for independence, a love of green things, a belief in the importance of small-scale economics, and a certain weakness for romance." Plus, of course, his time at CMU: "Studying at CMU is what pushed me toward farming in the first place," he says.

"When I came to CMU, I was really worried about environmental degradation and climate change but being worried about the amount of carbon you're emitting is a terrible organizing principle for a community," Rempel reflects.

"Small-scale agriculture is venerated in the CMU community, especially within IDS, and the profs are good at taking the dissatisfaction many of us feel with modern life and laundering it through enough Wendell Berry that you begin to feel nostalgia for a lifestyle you've never actually experienced."

Touché. But, as Rempel admits, the kicker is that lifestyle delivered.

"The magic of small farming is that it really is able to channel a range of ethical and political impulses—concerns about the environment, animal welfare, social and economic disconnectedness, wanting to live in functional communities—and point them in an actionable direction that moves toward building something beautiful and useful."

"Small farming culture is also populated with a trust in nature to heal itself. The basic idea is that if you give the land a bit of a jumpstart—plant native plants, stop with the chemicals and destructive tilling practices—it will really begin to flourish. That's exciting for me. It has an ethical dimension, but also a straightforward aesthetic one: I'd prefer a landscape with more trees and flowers than the endless bare soil that depresses me so much in spring. It also provokes my curiosity, a mixture of hope and doubt: I guess I want to find out whether the milkweed, white cedar, bur oak and prairie grasses will win out, or if what our land really wants to do is grow thistles."

Today, Rempel lives and works on the Natural Collective CSA farm with friends, partners, and one foster son. When COVID-19 hit earlier this year, facing uncertain demand from the restaurant industry that normally buys a large share of their produce, and a radically increased demand from home consumers seeking safe, local access to good food, Natural Collective had a dilemma:

"Briefly, we considered shutting down the farm for the year and working on other projects like building up our soil with cover crops and compost or improving our infrastructure. But we decided to go the opposite way and double our CSA—from 80 shares offered to 150. If small-scale ag has any pretensions of being more than a niche product in an industrial market, a pandemic would be exactly the time to ramp up."

"There's a tension at play in the decision we made, because myopically focussing on production is part of the reason there's so much chemical use in agriculture and why feedlots exist. But still, this would have been the perfect year for 1,000 new farmers in Manitoba to rent some land and sell veggies or pastured pork. With the American processing facilities shut down, the big players were giving away pigs—there was a real opportunity there."

But in discipleship—as in music, sailing, and childhood games of telephone—it seems tension on the line is what makes the magic happen.

"It was a bit terrifying to have that many people depending on us, 150 families," Rempel says "but everything that's worth anything in my life is there because I walked blindly into some responsibility I'd never have accepted had I thought about it longer."