Doktorvater: How Dietrich Bartel is bringing a teacher’s heart to research communication 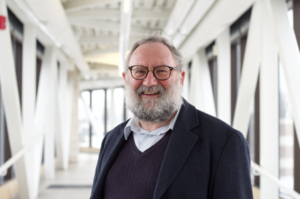 In German, the word for a doctoral supervisor is doktorvater, or "doctor father." No phrase could better express the spirit of pedagogical generosity and delight which critics have identified in the work of Music Professor Emeritus, Dietrich Bartel.

Bartel has been teaching at CMU since before it existed, beginning with CMBC back in 1985. Though he now teaches only part-time, Bartel's passion as an instructor is unflagging. In the classroom he is beloved for his animated and sympathetic teaching style, his expertise, and his sensitivity to the connections between music and discipleship. Outside of school, Bartel puts his specialized knowledge and talents to work for the wider community, serving as music director and organist of All Saints Anglican Church in Winnipeg. Between times he also sustains a vibrant research life, most recently exampled in his 2018 annotated translation with commentary of Andreas Werkmeister's 1707 music theory treatise Musikalische Paradoxal-Discourse.

"We talk a lot about the importance of bringing our research into the classroom, but this was actually the other way around," Bartel says. "This research grew out of teaching, from explaining and talking about what the concept of music was like before the Enlightenment, particularly in the Baroque period."

In the preface to the new translation, Bartel explains that:

"[Werkmeister's] concept of music is still rooted in mathesis, in the world of Pythagoras... [He] is the last great advocate and defender of the Great Tradition of musica, with its assumptions that music is a divine gift to humanity, spiritually charged yet rationally accessible, the key being a complex of mathematical proportions which govern and are at the root of the entire universe... Thus understood, music is the audible manifestation of the order of the universe, allowing us glimpses, sound bites of the very Creator of a well-tempered universe, the world around us, and of our own relationship to each other, our environment, and the divine powers which placed us here. And so, I tell my students: if you want to understand music from antiquity to 1700, start by reading Werkmeister."

Heretofore however, this advice was a bit problematic, as Bartel well knew. Even though the Paradoxal-Discourse is a key text in Baroque Music studies, no English-language translation had previously been achieved. Bartel says this is likely due in part to Werkmeister's difficult style, but perhaps even more to declining biblical literacy and the challenges presented by Werkmeister's almost constant use of allusion.

"There are no translations, not least because it is awkward German, you know. It really is convoluted, and not just anachronistic—it's Werkmeister's style. He goes on and on about things! Beyond that, Werkmeister is always referring to various other authors and ideas. And there's so much reference to scripture, sometimes explicitly, sometimes only hinted at by the phrases that he uses. And much of this is totally hidden to the average reader, especially today."

In 1997, Bartel published his first book, Musica Poetica: Musical-Rhetorical Figures in German Baroque Music. Today, it is considered essential reading in the field, purchased by experts and students world-wide. Bartel says the book was largely a summary of the ideas espoused during the period. Nevertheless, Bartel wanted Werkmeister's writing—the original expression of his thought—to be accessible to students.

"I wanted to be able to read my students what was actually written—the primary texts. So, I started translating a bit of Werkmeister—this is 20 years ago now, or more—for my Baroque Music History classes. And you know, students found the material fascinating, because it was such a different concept of music than the Enlightenment and post-Enlightenment thinking.

So, I just ended up doing more and more of that translating, but then there had to be so much explaining, so that translation begat more and more digging, and I ended up with this big body of footnotes, initially just for myself. But then I thought, I really should turn this into a book, because none of this stuff is accessible to an English reader."

Thus evolved Bartel's newest book, Andreas Werkmeister's Musicalische Paradoxal-Discourse: A Well-Tempered Universe, which has garnered enthusiastic critical review. Recently, Dr Ruth Tatlow—a Bach expert and peer in the field—praised the book for its ample, meticulously annotated front-matter, noting an intimate relationship in Bartel's work between teaching and craft, between his own research and instruction:

"[Bartel] does everything in his power to assist the reader of this book... [his] pedagogical heart is apparent throughout. From the first page one senses a caring mentor willing the student to understand. I have read Musicalische Paradoxal-Discourse numerous times in the original German, but it was not until Bartel's 'tutoring' through this book that I understood how blind I had been to some of Werckmeister's unstated implications, one of which has propelled my research along an exciting new line of inquiry."

CMU we teaches students that "a broad base makes a better specialist." Bartel might say a "well-tempered" one. Like so many of CMU faculty, Bartel is a specialist in the study but a generalist in the classroom. The wide swath of his teaching areas—which includes Music History, Fine Art History, Liturgy and Artistic Expression, Musicology, and History of Jazz among others—forces Bartel to stay plastic in his thinking, nimble and inviting in his communication style. It also presents countless opportunities to be surprised, challenged, and inspired by his students' engagement with different topics.

"Really great, useful research I think is often inspired by issues that students are dealing with directly in life outside the classroom, and that affects us too as professors," says Bartel.

Teaching widely helps Bartel write specifically, because it keeps him in tune with the needs of learners, so that he maintains a clear sense of what it means to write serviceable resources. For Bartel, every bit as much as teaching, research is an act of service. If the latest reviews are any indication, the doktorvater is coming through.

Bartel's next research project, already underway, will centre on theology and biblical reference in the writings of 17th century diplomat and music theorist Johann Mattheson. The book is tentatively titled Following the Capellmeister.