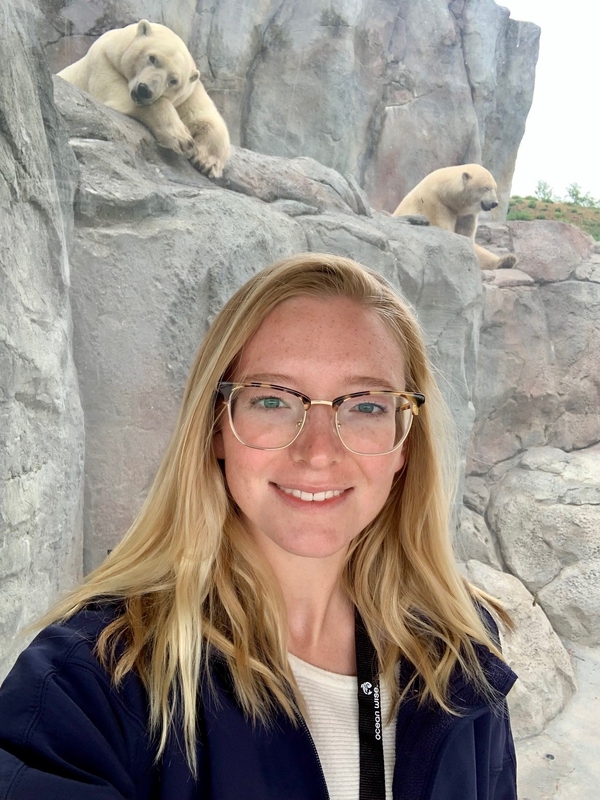 Sara Wolowich Brown (CMU' 19, Environmental Studies): "[I want to help] people become more literate of the natural world around them and make changes in the world to protect these species."

For Sara Wolowich Brown (CMU' 19, Environmental Studies), going to the zoo is more than just entertainment. It's become a passion.

Every year, she takes a pilgrimage to Assiniboine Park Zoo on her birthday. It's an almost ritualistic experience that connects her to the disorder of nature. "I always [been] very interested in science, and the natural world was always super fascinating to me. I always loved going to the zoo," says the alumna who graduated with Environmental Studies major.

That passion and desire for connection with the natural world translated into a three-month work placement at Assiniboine Park Zoo this past fall, where she helped conduct polar bear observation and shoreline clean-up strategies. "I was a really unique opportunity to see a bunch of different aspects of the zoo," she says. "A lot of people, when they think of the zoo, they think about just going to look at animals, but [the Assiniboine Park Zoo] actually have lots of research projects that are going on, and that's a really big part of what they do."

Specifically working with the Research and Conservation Department, Wolowich Brown spent most of her time studying polar bear personalities. "[I surveyed] what they're doing, where they're located, are they interacting with other bears? All that information is used to provide care for the bears at the zoo." Says Wolowich Brown.

Wolowich Brown says you might not think of individual polar bears as unique, but over time, she got to know the bears on a personal level. "There was this bear I spent a lot of time with; her name is Aurora. One of her defining features is that she has the largest eyes—beautiful big brown eyes. I kind of got to learn [about] her funny habits."

A side project that Wolowich Brown says she was excited to be a part of was observing bears that have been given a special tracking tag.

Rather than traditional collars that slip off adult male bears heads and choke cubs as they grow. The tags are attached to the fur on the bear's back, between shoulders, and are about the size of a human palm. After significant analysis and beta testing at the zoo, researchers will use the tags to track polar bears in Churchill.

Whether it be understanding that polar bears like to watch the zoo's crowds or that all the bears at Assiniboine Park Zoo are rescued from Churchill, Wolowich Brown says her time at the zoo gave her a much deeper appreciation of conservation efforts taking place in the province.

"The zoo is about education, conservation, and research. It's not just entertainment," says Wolowich Brown. "The more people know, the more people care about something. Hopefully, that care can move into actual real-life decisions to better the planet and take care of these animals."

Wolowich Brown's placement at the zoo came through a program called Ocean Wise, which connects young people with opportunities in conservation. She says Ocean Wise "Looks at skills you have and your background and match you up with an organization that could use your skills and develops them."

Some of those skills, Wolowich Brown says, she developed through CMU. After joining the Environmental Studies program in its infancy, Wolowich Brown says, "I know when I got there that there were new professors, so it was a growing experience between the professors and the students." But she says she found the program's interdisciplinary focus to be beneficial to her education. "The overall concept of the crossover between the sciences and social sciences was already there," she says.

Kenton Lobe, Teaching Assistant Professor, International Development and Environmental Studies at CMU, says the institutions' courses are shaped to help students explore that crossover. "I am enlivened by dialogue that reflects careful reading, impassioned dialogue, and the ongoing creativity I witness in student thinking and work," says Lobe. "It will seem cliché to talk about the energy of young people, but it is true. I am encouraged by students grieving deeply for broken kinship relationships with our non-human neighbours."

Wolowich Brown hopes to blend her passion for conservation with education in the future. "I think there is a disconnect, and people don't understand we have beluga whale, seals, and polar bears; we have a whole other ecosystem that is directly connected to us," she says. "[I want to help] people become more literate of the natural world around them and make changes in the world to protect these species."