From crafting a message, to building a movement 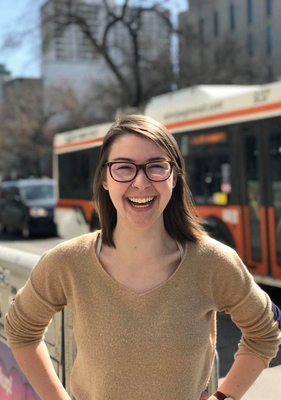 For many, work and passion necessarily become parallel pursuits. But for 2017 grad Bethany Daman, working at Manitoba's Green Action Centre (GAC) enabled her to fuse the two, developing her professional gifts in direct service of her passion for social justice.

Daman, who earned her CMU degree in Communications and Media, has spent the last 18 months working for GAC as its Living Green, Living Well Coordinator—a job centred around community outreach and education regarding the many ways that living greener improves individual and community wellness.

"To date, that job is probably one of the most life-changing experiences I've had, full stop. Being there when the IPCC report came out, being among those people and part of that community as the truth about climate change and its looming consequences have come out, I don't know what I would have done without them."

In the first months after graduation Daman earned daily bread doing freelance contracts, including a brief stint working for Geez Magazine. During this period, she worked mostly from home, "which was really convenient," but began to miss the camaraderie of a shared workplace.

At the same time, mounting public concern over climate change began to dominate Daman's thoughts. With those concerns came a further renewed craving for togetherness, a deep-seated feeling that "none of us can face what is coming alone."

That's when the position with MGAC opened up, and though Daman had concerns about how such work might reshape her mind and life, she applied. Getting the job changed her life.

"This whole two years since graduation have really been a journey for me of learning that, today, all justice is climate justice. The betterment of people everywhere comes down to climate action and climate change resilience," Daman says.

Galvanized by the release of the IPCC report, Daman's team at GAC co-founded the Manitoba Climate Action Team: a coalition whereby pro-climate initiatives and non-profits are now coming together as one, to contribute more meaningfully to Canada's progress toward a just transition off of fossil fuels. "Collectively, we can work towards faster and more efficient mitigation of the impacts of climate change than any of us could on our own," Daman says.

"One of the most common difficulties of work in the non-profit sector is that of limited funding and resources. Delivering a quality product or service, despite having less to work with, is a constant effort."

Nevertheless, Daman says these challenges pushed her to "use and build on even the most basic skills [she] learned at university," including those not always foregrounded in the job description. For Daman these included "media skills, human-centric communication, and sensitivity to diversity," just to name a few.

In September 2019, with mixed emotions, Daman left her job at GAC to relocate with her husband to Calgary, AB. The couple, who met while both were students at CMU, share their passion for climate justice. Their counter-cultural "green wedding" last summer even earned a write-up in the Winnipeg Free Press.

"Leaving GAC has been one of the hardest choices I've had to make in a long time. Leaving Winnipeg, my community here, it's going to be very hard, but we're looking forward to getting invested in Calgary and the 'movement-building' efforts there. It's going to be challenging in an area with an oil-driven economy, and there's lots for us to learn, but we're committed, we're reading up, and we're looking forward."

Despite the move, Daman plans to remain connected with GAC as a friend of the organization.