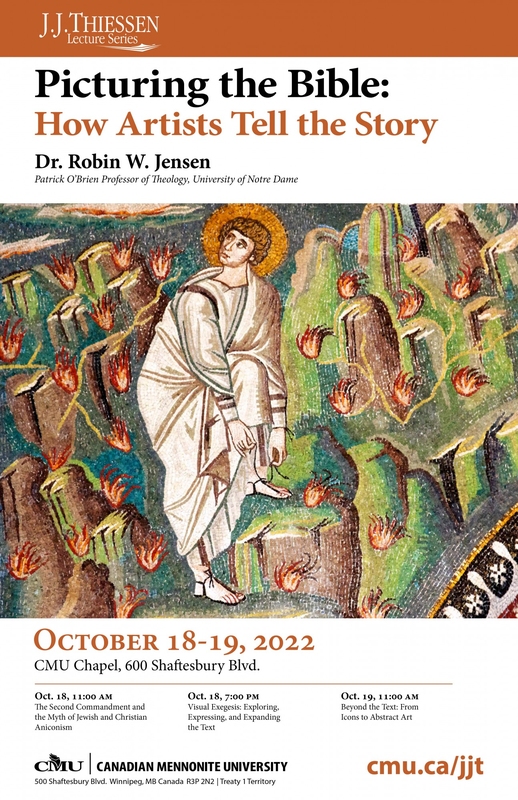 Contrary to what is often assumed, both Christians and Jews made pictorial art for their worship spaces no later than the early second century CE and have continued to do so through history. From the first, these artworks were never simply decorative but drew upon stories from both the Hebrew Scriptures and the New Testament. As such, they served and still serve an exegetical and even theological purpose and not simply an illustrative one.

The first of these lectures will consider the question of what early Christians (and Jews) considered idols and why depictions of their sacred stories were not among them.

The second lecture will consider the function and purpose of sacred art and consider the ways that artists' works through the centuries have illuminated and interpreted biblical narratives as well as theological dogmas. This lecture will also explore the relationship between verbal and visual exegesis.

The third lecture in this series will explore the emergence of non-pictorial sacred art in the modern era, and discuss how such works may still engage viewers through more abstract forms and formal elements of color and shape.

Dr. Robin Jensen's research and publication focuses on the relationship between early Christian art and literature and examines the ways that visual images and architectural spaces should be regarded as modes of theological expression. Her published essays and books contend that, in addition to interpreting sacred texts, visual images enhance liturgical settings, reflect the nature and content of devotional piety, and explicate ritual practices.

Jensen teaches courses on the character of late antique Christian and Jewish art, the history and evolution of Christian architecture, the iconography of the cross and crucifix, depictions of Christ and the Virgin Mary, and the place and controversies over images and idols in ancient and early medieval Christianity. Her most recent book, From Idols to Icons: The Emergence of Devotional Art in Early Christianity (University of California Press, 2022) examines the emergence of a Christian material piety in the fourth and fifth centuries. This work discusses the perceived danger of visual representations of divine beings and the belief that images may facilitate the presence of holy persons in their absence.

The Second Commandment and the Myth of Jewish and Christian Aniconism

Beyond the Text: From Icons to Abstract Art