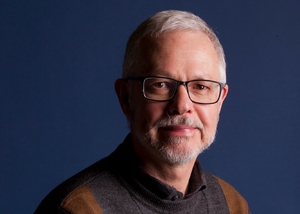 On February 16, John Longhurst received the Lieutenant-Governor's Award for the Advancement of Interreligious Understanding, an annual honour presented to a Manitoban who embodies understanding between religious groups.

Longhurst graduated in 1979 from Mennonite Brethren Bible College, one of CMU's predecessor colleges, and was CMU's Director of Communications from 2005-09. He has been a freelance faith columnist and reporter at the Winnipeg Free Press since 2003. Two years ago, he initiated a project to increase religion coverage at the Free Press, one of the reasons he has earned this award.

When the newspaper was considering how to improve at engaging the community and remaining financially viable in an ever-changing media landscape, Longhurst suggested they reach out to faith groups. There was one problem: the Free Press didn't have the necessary funds. So Longhurst went out and raised them. He and publisher Bob Cox spent almost a year visiting faith groups, asking for their support to tell these underrepresented stories. Today 15 different faith groups contribute $25-30K to the project every year.

"If you see something about religion in most media these days, it will be because of scandal or violence," says Longhurst. A Muslim extremist detonates a bomb, a religious leader abuses a child, or right-wing Christians storm the United States Capitol, waving Jesus flags. "Bad news always travels faster and further than good news," he says.

"But the stories we don't hear are the ones about all the things that faith groups are doing to serve their members or to make their communities better places to live. He references surveys that consistently show religious people are the most engaged in their communities, through donating and volunteering, and more likely to vote and follow the media. In religious services, people are reminded to think of others, pray, donate, and serve.

He says one of the goals of the project is to promote interfaith understanding by telling stories of people of faith living their lives and doing normal things. "It's hard to hate someone when you see them as human beings. And that's what we're trying to do, just share those human stories."

A few others write faith stories alongside Longhurst, including Brenda Suderman (CMBC '83). Since the initiative started, the Free Press has published more than 200 faith stories a year scattered throughout almost every section of the paper, more than doubling their pre-project output.

"In this province where we so proudly embrace multiculturalism, Mr. Longhurst's vision, passion and commitment to bring voices from our diverse religious and cultural communities together, truly exemplifies the spirit of this award," said Lieutenant-Governor Janice C. Filmon in a news release.

Longhurst gives a lot of the credit to editor Paul Samyn and publisher Bob Cox, for listening to his idea and working with it. "Today [the Winnipeg Free Press] are the only newspaper in Canada which has made this kind of commitment to regular reporting about local faith," he says. He also credits Suderman and the supporting faith groups for making the plan come to life. "This is an award we all share. Together, we've created something unique and meaningful—and I am glad to be part of it," he says.

Longhurst has extensive experience in interfaith and international work. He has worked with Mennonite Central Committee, Mennonite Economic Development Associates, and Canadian Foodgrains Bank, communicating their stories from Manitoba and around the world.

In addition to writing for the Free Press, he also freelances for other publications, coordinates communications for Mennonite Disaster Service Canada, and serves as president of the board of the Canadian Christian Communicators Association and chair of Anabaptist Communicators.