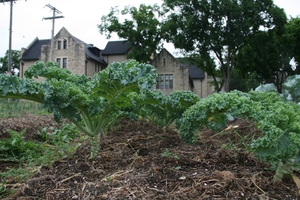 You may have heard of "emerging writers" or recognize the phrase "emergent church," but did you ever hear of emerging farmers?

The Metanoia Farmers Cooperative is a group of CMU students and alumni; though individual memberships shift with time, the collective as a whole is permanently responsible for running the CMU Farm, and working 14 acres of associated land near the village of Neubergthal. All of them are emerging farmers: lovers of God's good creation motived by their faith to learn and develop skills they may or may not have grown up with, in order to become practitioners of sustainable agriculture.

This year is a big anniversary celebration for the CMU Farm: 10 years of good clean dirt and discipleship.

Some of the Metanoia Farmers grew up on farms, learning the work from parents and grandparents in whose footsteps they are now actively following. Others are first-generation farmers, learning on the job, having more recently discovered a vocational calling to all things green and leafy. Inherent in their commitment to farming-as-discipleship are several core tenets that shape how the group works the land, as well as how they work together.

As a workers' collective, the Metanoia Farmers practise consensus decision-making models and an economic model called Community Shared Agriculture (CSA). They strive to be a source of education to the community concerning food security, sustainability and justice, and to practice peaceful stewardship of the land. They achieve this through their relationships with share-holders, by hosting practicum placements for CMU students, and through other initiatives like seed-saving.

As practitioners of sustainable agriculture, the Metanoia Farmers rely primarily on organic, person-powered cultivation methods that yield nutritious harvests while improving and enriching, rather than impoverishing the soil. They plant open pollinated, heirloom veggie varieties. This is something like the agriculture equivalent of choosing "open source" or "public domain" material.

Planting this way helps to maintain biodiversity on the farm—and by extension, in Manitoba. It also makes a stand for public ownership of all genetic varieties grown on the farm. (The opposite of publicly owned varieties would be patented or otherwise privatized varieties which expand monoculture and jeopardize community food security, to say nothing of political or economic consequences.) Furthermore, planting heritage varieties enables the farmers to practice seed-saving from their own plants, keeping native and heirloom edibles current and adapted to changing conditions in this region. This, again, is a conscientious move towards long-term food security and eco-sustainability.

All of this is represented right in their name. Greek for "repentance," metanoia implies a fundamental change of mind, heart, worldview, and behaviour. The group explains on their website that "as a group of new farmers, we felt the sense of transformation this word evokes reflected the experiences that brought us to this vocation."

The CMU Farm, and the Metanoia Farmers Cooperative itself, are bigger than any constituent member. They are parts of the superstructure that guides and nurtures each budding farmer into bloom. The all-important third part, of course, is the surrounding community of urban eaters that support the CMU Farm by buying farm shares. Taste the difference ethical agriculture makes by claiming your 2020 farm-share, here.