From planarian worms to the pandemic 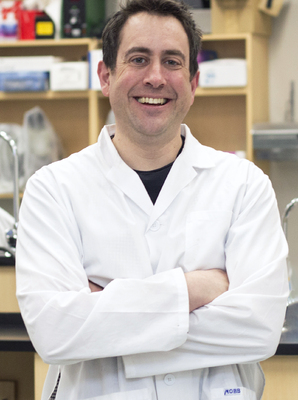 Dr. John Brubacher,Assistant Professor of Biology at Canadian Mennonite University, is midway through a research leave at Morgridge Institute for Research in Madison, WI. His current research is being applied to the COVID-19 pandemic, helping scientists discover how and where the virus infects cells and how nanobodies might be used to help prevent infection and treat illness.

Dr. John Brubacher visits the library every day. But instead of books, this library contains millions of yeast clones.

Brubacher is Assistant Professor of Biology at Canadian Mennonite University (CMU), but is currently on a three-year research leave, of which he has two years left. He's working at the Morgridge Institute for Research in Madison, WI as Visiting Assistant Scientist in the institute's Newmark Lab. Researchers there utilize the tools of molecular cell biology and functional genomics to address several major biological problems.

His research focuses on freshwater planarians—tiny flatworms that have incredible regeneration abilities. He's interested in germ cells, which produce the sperm and eggs cells that create new life, and the role they play in a planarian's ability to regrow a piece of itself into a complete organism.

While these creatures may seem like an obscure study subject, Brubacher says that a discovery in one animal can often apply to other animals and even humans. Through the planarians, he's hoping to learn more about wound repair and regeneration of our own tissue. Since planarians are closely related to parasitic flatworms, he hopes his research will also lead to a better understanding of parasitic diseases, like Schistosomiasis, that annually affect hundreds of millions of people in the global south.

To conduct his research, Brubacher planned to use a library of 500 million different yeast clones, developed by Harvard University. Each yeast cell contains a different variation of nanobody, which are antibodies from llamas and other related animals.

Antibodies are proteins that bind to various molecules and are important tools for studying cellular behaviour. If Brubacher wants to learn more about the role of a protein on the early stage of a planarian's germ cell, he can take a nanobody that binds to that specific protein, label it with a fluorescent light, after which it will attach to the protein, enabling him to track where the protein is being produced and doing its work. However, the library is randomized. Brubacher was about to start the work of figuring out which nanobodies would be useful to his planarian research, when COVID-19 hit. The scientists at the Newmark Lab asked themselves, "How can we be useful during this time?" They turned to the nanobody library.

Brubacher is leading the project, although he is quick to emphasize that he is not a parasitologist and their lab will contribute any findings to a virology lab that's already deep into the research. Although worms and viruses are very different, the process of growing yeast and isolating nanobodies is the same, so this coronavirus research will give Brubacher practice for his original project.

Besides keeping up with the big topics in biology today and networking to create connections for future CMU graduates, Brubacher was motivated to go on research leave for the opportunity to learn new tricks and methods to bring back to the classroom. "I could imagine using this nanobody library in a CMU course in some way," he says.

The opportunity to work on a long-term lab project, which hasn't been explored before and has an unknown outcome, is invaluable for students. Brubacher didn't have that experience in his undergrad, where instead it was "follow these cookbook instructions and learn this principle, but you're doing something where you already know what the answer should be at the end. And that's not really the way science works," he says. "Especially in upper year courses, we want to give students opportunities to do things that reflect real-world science more closely."