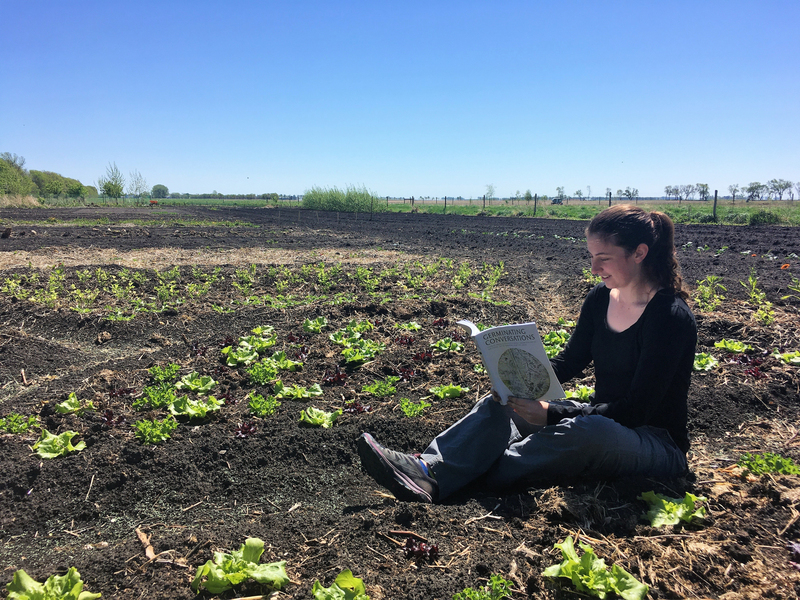 The spring of 2021 saw the release of Germinating Conversations: Stories from Sustained Rural-Urban Dialogue on Food, Faith, Farming, and the Land. Edited by Marta Bunnett Wiebe, a recent graduate of Canadian Mennonite University (CMU) and current Peace and Advocacy Coordinator at MCC Manitoba, and collaboratively published by CMU, A Rocha, Canadian Foodgrains Bank, and Mennonite Central Committee Manitoba, the book emerged out of over a 10-year-long period of class discussions, listening events, and public dialogues between urban and rural farmers in Manitoba. The book surfaces out of these various initiatives producing germinating conversations centred around reconciliation, food production, and ecological crisis. With over 30 participants of both rural and urban contexts, the book attempts to mirror the kind of dialogue, and most importantly, the kind of listening that is required for real conversations to take place.

Bunnett Wiebe began the long and arduous task of sifting through archives and collecting records for the book as a project for her undergraduate practicum at CMU. "The way that I approached the book was to look at what material was already available from previous Germinating Conversations events" explains Bunnett Wiebe, "everything from emailed conversations to transcriptions from events. When there was nothing for me to use on a former participant, I asked them to write reflections and articles related to the topic. We wanted to make sure both perspectives of food growers and food eaters were being represented."

Growing up on a farm in New Brunswick, Bunnett Wiebe's passion for food and food production began at an early age. Bunnett Wiebe shares that "farming and growing food make up my earliest memories. It was a daily part of life. We had farm chores and dinner conversations were often about what was happening on the farm. Our home and barn rested at the top of a hill at the bottom of which ran a brook that broke out into a forest. We mostly had livestock, cattle, pigs, chickens, and turkeys, and we always had a large garden for our family." As idyllic as Bunnett Wiebe's rural farm may sound, she asserts that there is nothing sentimental about the current state of agriculture: "It is very sobering when you think about how much food is wasted. The staggering statistics of food waste are accentuated by the fact that we are not aware of it, that we are so oblivious to the waste in our food system."

Indeed, as the book relays, "in Canada, 58% of all food produced for human consumption—totalling 11.2 million tonnes—is wasted." Kenton Lobe, Assistant Professor of International Development and Environmental Studies at CMU and contributor to the book, states, "There is nothing more damaging to our eco-system than agriculture. Simply proclaiming it to the choir does little to change that. We must think about land as a character in conflict, an integral actor, this is why this is a significant book."

Notwithstanding the discomforting statistics about food waste, both Bunnett Wiebe and Lobe claim that hope should also not be discarded as waste either. Yet hope begins by acknowledging the problem and our collective part in it. As Lobe contends, "food is both alienating and intimate. There is very little that we are intimately tied to and alienated from as we are to food." Bunnett Wiebe elaborates that "by eating, we are implicated in the life and death of the land, the place where it came from and the people who grew the food. We are implicated in the stories of those who package the food as much as those who prepare the food and those who deliver the food."

As the book title suggests, this project is a seed from which will hopefully produce more conversations that bridge rural-urban divides. As Lobe says, "We must recognize that the work is not done. The seasons are cumulative. People are beginning to recognize that we have to change our lives, not just our purchases. When we do not eat the food, we throw it away and it goes nowhere." For Bunnett Wiebe, Germinating Conversations is about "how significant food is to the way that we eat and farm and the way we are." Bunnett Wiebe hopes that readers "will be able to see the diversity of perspective and engage within their own communities on these topics."

The book includes a study guide for readers to reflect on their own practices and experiences regarding food production, faith, and land. The book is available at CommonWord Bookstore and Resource Centre in both print and ebook formats.