A community of hope, life, and vibrancy inspires CMU alumna at COP26 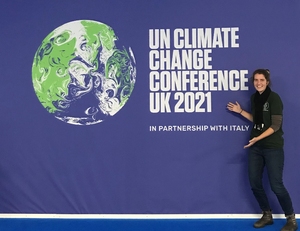 With floods decimating major highways, forest fires pillaging towns and countries, and a global average temperature steadily increasing, there is without a doubt a climate emergency on our hands.

Canadian Mennonite University alumna Kari Miller (CMU '21) has seen the atrocities of climate change and has made it her life's work to mitigate the shifting world. Miller's role as the Environmental Education Coordinator for A Rocha Manitoba gave her the opportunity to attend the 26th Conference of the Parties of the United Nations (UN) climate summit in Glasgow, known more famously as COP26.

Together with the Christian Climate Observers Program (CCOP), a coalition of Christian environmental NGOs of which A Rocha is a part, Miller hopped on a plane and flew to Scotland to witness world leaders make brave new commitments towards climate change action.

"[CCOP] said they were interested in these conversations that are happening at COP26, and we want to send a group of young folks that are also interested and are also Christian," says Miller, who, due to her history with A Rocha and CMU was an obvious choice for attendance.

Miller was given special passes from the UN, which allowed her to enter what the conference called the Blue Zone, an area of the summit which hosted negotiations with world leaders and politicians. Those with passes to the Blue Zone would be allowed to watch talks and debates unfold, acting as witnesses to hold the politicians accountable.

"You walk into the Blue Zone, and there are these two massive screens that just have all these meetings and all these acronyms, and you're just overwhelmed!" says Miller. "I swear there are about 50 meetings a day, most of them open to observers."

Over 130 presidents and prime ministers were in attendance, and the conference's website promoted the summit as the event that will "unite the world."

At least, that was the intention.

In reality, Miller anxiously jumped in a carbon-emitting airliner and flew internationally during a pandemic to be met with doors closed in her face.

Miller recounts a particular event, hosted by all the Canadian delegates, that initially allowed observers like herself to attend. With excitement, she says she ran towards the talk only to have a security guard turn her away—the meeting was closed to all except official Canadian delegates.

MIller (second from right) joins A Rocha Canada representatives with Mike Morrice (centre left), a Canadian delegate at COP26 and MP of the Green Party for Kitchener Waterloo.

Understandably, Miller says, "That was frustrating!"

Miller was allowed to take in most of the talks, but during the final days of COP26, she found her special pass less and less advantageous. Miller says, "What would it look like to allow more civil society in to be a witness to negotiations and hold our politicians accountable? I didn't feel like we were able to do that."

Having been turned away from the glitz of the Blue Zone, Miller retreated to another space at COP26 called the Green Zone. She says the Green Zone was open to members of the public where art projects were on display and NGOs from all over the world could work booths, sharing stories and sustainable tech developments. Political protests took shape, and a community of like-minded individuals made personal commitments to fighting climate change. "That was a place of life and vibrancy," says Miller.

Climate Strike, the Saturday in the midst of COP26.
Miller: "Together, with people from the global A Rocha family, as well as many other faith communities, we marched to bring awareness to climate justice."

Among the protests in the Green Zone, Miller says she learned one of the most important lessons she took from COP26. "Change can happen, and it comes from everyday people, not just those with [political] power."

The Green Zone provided Miller with more opportunities to connect with ordinary people. Escaping the political posturing in the Blue Zone reminded her of the connection people have with the land.

Looking back, Miller's time at CMU allowed her to pursue that connection in a unique way.

Representatives from A Rocha locations all over the globe gathered at COP26. Miller (rear-left) is joined by others from A Rocha France, A Rocha UK, A Rocha Canada, and A Rocha Ghana pictured here.

A Rocha's Manitoba Director Scott Gerbrandt works directly with Miller, and together they explore those natural cycles of life and work toward education and development. "At A Rocha, we seek to provide people with hands-on educational experiences that increase their knowledge and love for their own place," says Gerbrandt. "As Christians, one of our faithful actions of obedience is to be fully present to the pains and challenges that break God's heart. In our current moment in time, we are seeing the pain and sorrow that climate change is bringing to people and the good earth."

Following COP26, Miller says, "The individual does matter, in-so-far-as when we change as individuals, hopefully, the momentum builds, and our government and policies will follow along." She hopes to integrate what she has learned into her education programming at A Rocha and inspire another generation of earth protectors.