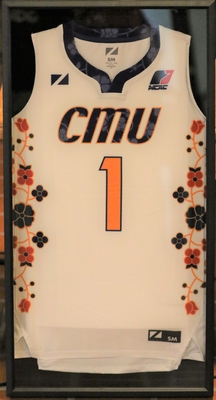 On October 24, the CMU Blazers unveiled new athletic uniforms inspired by the Treaty One land that is home to CMU.

The uniforms were designed by Indigenous artist Amber Green and feature floral patterns and "Treaty One Territory," along with other words and symbols connected to the treaty.

"It is a uniform that will spark deep and meaningful conversations," said Athletics Director Russell Willms at the event. "By wearing these uniforms, we seek to honour treaty and the first peoples of these lands, and it is our hope that these uniforms will help facilitate meaningful dialogue."

CMU student athletes, coaches and staff gathered at the university to smudge and listen and learn from the Treaty Commissioner of Manitoba, Loretta Ross, and Elder Harry Bone.

"I want to remind you that the treaty 150 years ago was about relationship, was about all of us working together," said Bone. 2021 marks the 150th anniversary since Treaty One was signed on August 3, 1871 by the Anishinaabe and Muskegon Cree peoples and the Crown.

Ross said Indigenous people understood the treaty as an agreement to share the land and be equals, but the settler government did not listen to their perspective, instead regarding the treaty as a surrender of land and continuing the colonial project.

"If we look at the country of Canada and what it's built on, it's all built on that one perspective," she said. "Your challenge, as young university students, is to question that and to make changes... because that treaty relationship endures today... it's a responsibility."

When Willms was considering new uniforms and asked students what they thought of recognizing Treaty One, "it was instant approval and support," he said.

The volleyball uniforms are an evergreen colour with accents of amber and a muted floral pattern. The words "Treaty One" are displayed prominently across the chest, bordered by two red lines that reference the one in the Treaty One flag that represents First Nations people. Under the jersey number on the back is a bright floral design.

The basketball uniforms are white with a bold floral motif in red, amber, evergreen, and indigo winding up both sides of the jersey. The left leg of the shorts features a large sun with the year 1871 at its centre, encircled with the words, "Treaty One Territory." It has seven rays, taken from the seven rays on the flag that represent the seven First Nations in Treaty One territory.

Along the back hem of both uniforms are written the words, "As long as the sun shines, the grass grows, and the river flows," the phrase used to remember that the treaty was made to exist for all time.

"My inspiration was taken from the late Elder Victor Harper, I worked with him a lot at my full-time job at Manitoba First Nations Education Resource Centre," said Green, the artist. "He was a huge advocate about learning off the land and incorporating that into our school system... he would show these amazing floral patterns and just tell us about the representation of the land, water, flowers, even the roots—all these different lessons that can come from that. So, I thought that was really neat that I could incorporate that into a design a school's going to wear."

CMU President Cheryl Pauls is "heartened and inspired by the new Treaty One uniforms. They tell a story of CMU's commitment to learn and to honour what we mean when we say, 'We are all Treaty People.' As the uniforms were unveiled, Treaty Commissioner Loretta Ross spoke with grace of "mino-pimatisiwin"—a Cree word for the good life, that is life that is good for all. I'm hopeful that the beauty of the uniforms will remind us to live into the hopeful call of that word."

The new uniforms will each be part of a traditional smudging ceremony before they premiere in a game setting, the first of which is the men's and women's volleyball home openers on October 29.

CMU is the first post-secondary institution in Manitoba, and the second in Canada, to introduce Indigenous-designed uniforms as a form of land acknowledgement and an act of bridge building with the Indigenous community.