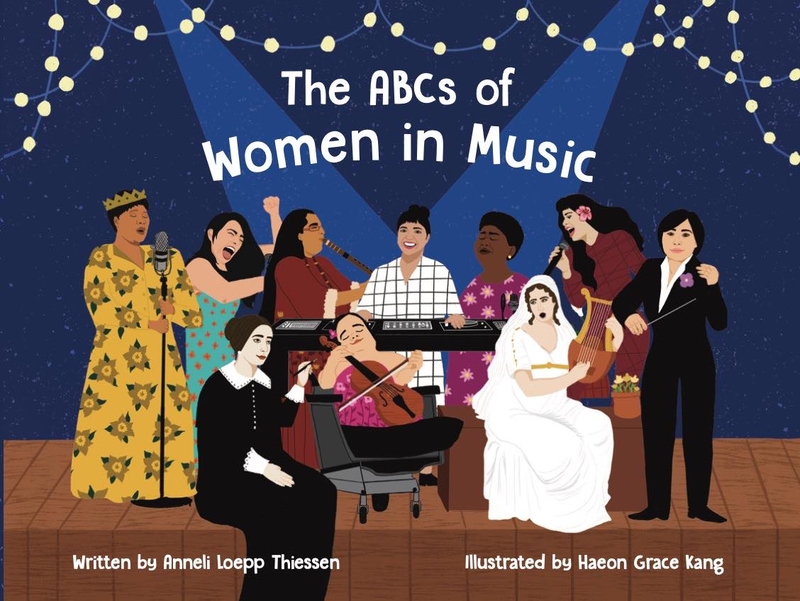 A vibrant children's book featuring 26 women in music will soon be hitting bookstore shelves, and it was created by two CMU alumni. Anneli Loepp Thiessen (CMU '18) first wrote The ABCs of Women in Music in fall 2020 as a creative project for a feminist theories class at the University of Ottawa, where she is a PhD student in interdisciplinary music research.

The book features a different woman in the music industry for each letter of the alphabet, spanning over 1,000 years of music history and representing a diversity of ethnicities, abilities, and professions.

It wasn't something she originally thought would go beyond university walls, but with the encouragement of her professor, Dr. Shoshana Magnet, Loepp Thiessen submitted it for publication. She knew instantly that she wanted Haeon Grace Kang (CMU '17) to illustrate the book, whose colourful pictures make the stories come alive.

Published by GIA Publications, the book will be available to purchase everywhere on May 1, 2022, but is accessible earlier through preorder, available now. It has received endorsements from artists like Tanya Tagaq, Gabriella Di Laccio, and Quilla and has already made it once to top 20 on Amazon's children's music biographies list.

Anneli Loepp Thiessen: "You need models of women who have gone before you and done the thing that you want to do."

Loepp Thiessen hopes this can be a helpful music education resource that inspires a new generation of girls. "Something we talk about with women in music advocacy is that women need to be able to see themselves at the finish line of their career," she says. "You need models of women who have gone before you and done the thing that you want to do."

Citing consistently low numbers of women represented in music, Loepp Thiessen says, "We need to right away from the beginning be encouraging children to think about who is around them in music and who are their musical role models. Whether they go on to have a career in music or not, it's important for them to see themselves as part of that creative process."

A lot of research went into curating a diverse range of ages, races, abilities, cultures, and genres. The book doesn't focus only on performers, but also composers, producers, musicologists, DJs, researchers, and more. Choosing only 26 women was a very difficult task and Loepp Thiessen says many versions of this book could be written.

One of her goals, which the team achieved, was to have white women make up less than 50 percent of the people represented. "I think diverse visibility is really important to kids," says Kang. "When I was growing up, I never saw people like me in media. That was really hard because I would feel like I needed to change myself in order to fit this prototype person that just wasn't me. Particularly in terms of seeing everyone successful as being these white, able-bodied, completely healthy [people]... I think if I had had different models for what it meant to be a successful person as a younger person, it would've been easier to accept myself as who I am and pursue the things that I want to pursue with more confidence."

Kang created her dynamic illustrations by using many different reference images, whether from the internet or from engraved icons, to create a composite of each person's many different facets. "I wanted it to be a holistic representation of who this person was," she says. She used her iPad and Procreate to draw the illustrations, which also include a floral motif, with a different flower selected for each woman.

Haeon Grace Kang: "...if I had had different models for what it meant to be a successful person as a younger person, it would've been easier to accept myself as who I am and pursue the things that I want to pursue with more confidence."

The support Kang received at CMU was influential in her artistic development. "So many of my profs at CMU provided creative project options for assignments that also really helped me to grow as an artist and learn what it means to make meaningful work," she says. "I think the encouragement and mentorship I experienced at CMU, even if it wasn't directly related to art, really formed me as a person and therefore as an artist."

It was CMU faculty, too, that shaped Loepp Thiessen's work on the book. "I think of the influence of faculty like Janet Brenneman, who has done her own research on gender issues in music. I was really honoured to study under her during my time at CMU," she says. "I also think about my piano teacher Shirley Elias, who always encourages me to take on projects that are life giving for me."

Loepp Thiessen completed her Master of Music in Piano Performance in 2020, after graduating from CMU with a Bachelor of Music in Piano Performance. Meanwhile, she was part of launching the new Mennonite hymnal, Voices Together, a multi-year project she was involved in bringing to life. She is a Yamaha Fellow at the Eastman Leadership Academy and director of Ontario Mennonite Music Camp.

Kang graduated from CMU with a Bachelor of Arts in Biblical and Theological Studies and was quickly back in the university's halls, completing a Master of Arts in Theological Studies at CMU in 2021. She is now studying for a Master of Marriage and Family Therapy at the University of Winnipeg while simultaneously working at a degree in Fine Arts at the University of Manitoba, as well as working in youth social services.