A voice of and to the youth 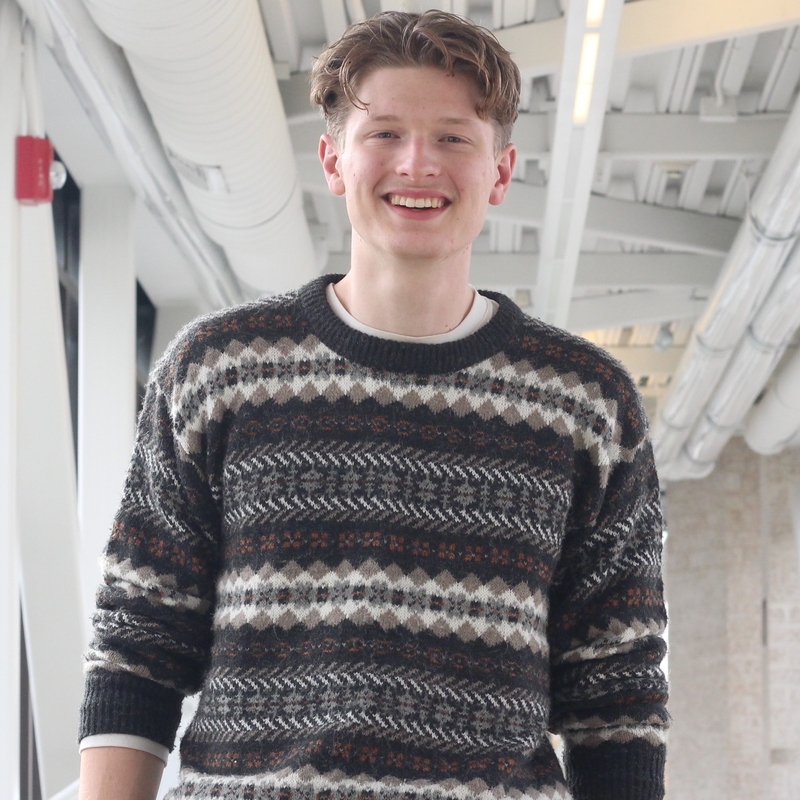 There's a reason every time you see Nathan Dueck, he looks like he has somewhere to be. It's because he does. Dueck is on the Youth Advisory Council of Winnipeg's Mayor, Brian Bowman; he is a student representative on Mennonite Central Committee Manitoba's Board of Directors; and he is Vice President Advocacy on Canadian Mennonite University's (CMU) Student Council, through which he sits on CMU's Board of Governors, Senate, and Academic and Program Council, as well as its Sexual Violence Prevention Committee.

And he does all this while being a full-time student.

Dueck, 20, is in his third year at CMU, studying history and philosophy through an interdisciplinary degree he's titling, "History of Western Thought." He is also a writing fellow for a CMU professor, editing students' papers, and works as a reporter for the Wolseley Leaf newspaper. He is planning on attending law school, a goal of his since high school.

It's a lot for one person to juggle. But after working at summer camp, he's used to a lot of activity and less sleep. Dueck spends his summers working at Manitoba Pioneer Camp, where he has been assistant director of the boys' camp for the past two years.

He doesn't find his packed schedule draining, though. "I look forward to these meetings," he says. "I gain new insights into how society and institutions within society are structured and that is just very invigorating for me."

However, it can be challenging to be a voice for the majority of youth when that demographic is so large and diverse. It is his role to present young people's concerns around the big meeting tables, but sometimes he doesn't even agree with them. "How to be a representative but also my own person is tough," he says. Through these experiences, he's learning how to hold a variety of positions and concerns in tension and discern their importance within the big picture.

Ultimately, he wants to work with institutions to make a difference. "More and more in the past few years I have come to see institutions—academic or social or political—as really important for social cohesion, especially in an age of individualism," he says. "In an age when, for good reason, we have such skepticism and criticism of political and social structures and the ways in which they oppress people and the planet. But I think that cynicism should be coupled with a positive vision of how we can reform society and institutions without just tearing them down."

At CMU, there's a healthy relationship between students and faculty and institutional leadership, he says. So, in the absence of many voiced concerns from the student body, he wants to use his role to channel CMU students' goodwill toward the university and communicate the good work the institution is doing back to the student body.

He says CMU has given him a sense of agency to do so. "I don't feel that I'm just a 'token student' on Academic and Program Council, for example. I feel like they genuinely care what I have to say and consider my views."

Dueck feels humbled to be involved in these many roles. "Being in positions of leadership forces me to think more carefully about my identity and my privilege, and how I can do a better job of serving those around me. Both professionally and personally, these initiatives and committees have caused me to try to be more thoughtful and creative in how I think and act."